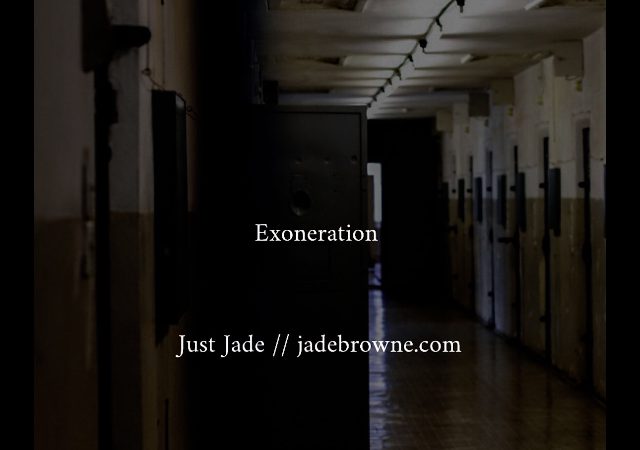 What does this word even mean? It’s understandable in context, but alone, what is it? It “occurs when the conviction for a crime is reversed, either through demonstration of innocence, a flaw in the conviction, or otherwise” or the dictionary definition is “to clear, as of an accusation; free from guilt or blame; exculpate”.

The first movie I want to highlight and recommend is Brian Banks. While in summer school, Banks was falsely accused of a crime he did not commit. Due to this, he spent six years in jail and faced continuous parol for the rest of his life. What happened next? View at a theatre near you.

Another piece I ant to highlight and strongly recommend y’all to see is When You See Us. This is a Netflix four part limited series about the Exonerated 5 formerly known as the Central Park 5. The 5, Antron McCray, Kevin Richardson, Yusef Salaam, Raymond Santana, and Korey Wise, were between the ages of 14-16 when they were falsely accused and faced minimum 6-10 years in juvenile jail while the eldest member faced 16+ in an adult correctional prison. How did they became free? How did people react? What evidence allowed the truth to be set free? The series detailed what happened from the five perspectives. The boys didn’t know each other but happened to be at the wrong place and the wrong time all during the same moment. Before the credits, each Exonerated 5 member was shown with a description of how their life is now.
Today, only the longest incarcerated member charged as an adult who endured hate and fights in prisons with consent and/or help of the guards still resides in New York. He is cultivating change for those wrongfully convicted like himself.

Everyday is a blessing. Imagine being falsely accused and having the entire nation and community treat you like a criminal when you did no wrong.

Today, these names have meaning of injustice being done to them and a call of action.
Time is essential. We celebrate birthdays as a reminder of memories from the past and expectations for the future. We try to spend our days to the fullest. But, in both Brian Banks and When They See Us, the main characters’ youths were taken away.

The boys were told to confess to a crime they didn’t commit and knew nothing about with false promises of going home. They were told to be “honest”. They were force “fed” what to say.

Time is essential and so is timing. It was a bad timing to be in a specific place or not have others to clarify your whereabouts, but God’s timing can change all that. His timing is perfect and has a purpose. Today, we can learn about these past experiences from the men as they advocate change to prevent this in the future.

God exonerates and frees us from our past mistakes. He forgives us wholeheartedly and graciously wipes it away when we confess and believe. Unlike these men, our sin aren’t wrongful convictions, there is a price for sin which is death but, He takes that away. Jesus took it on the cross because of love.

He also sets people in our lives for such a time as this. The Exonerated 5 didn’t know each other prior to being wrongfully convicted. But Richards said “I didn’t know that one day would bond me to these men for the rest of our lives”. God places people to walk and do life with. Some people are there for only a season while others are there for multiple times.

This post touched on a web of topics so here are the main ideas.
-Spend your time wisely to glorify God
-Every season and tribulation you have makes for great blessings. Just as the song Blessing by Lecrae ft Ty Dollar $ign says, “If I ever took a loss, I learned a lesson”
-Exoneration is freedom from enduring punishment one shouldn’t have to go through. Jesus endured our sin on the cross.
-Being set free from what we make ourselves a slave to is freedom. The actual person who committed the Central Park Jogger crime confessed because he felt like it was the right thing to do. Yes, punishment will follow, but once we realize that there is sun after rain and freedom on the other side, it is better to live a life transparently than hiding.
-Seasons are a time for growth. Treasure your loved ones every second. Just as Ephesians 4:26 states: Anger has no place.
-I strongly recommend all to see Brian Banks and When They See Us.