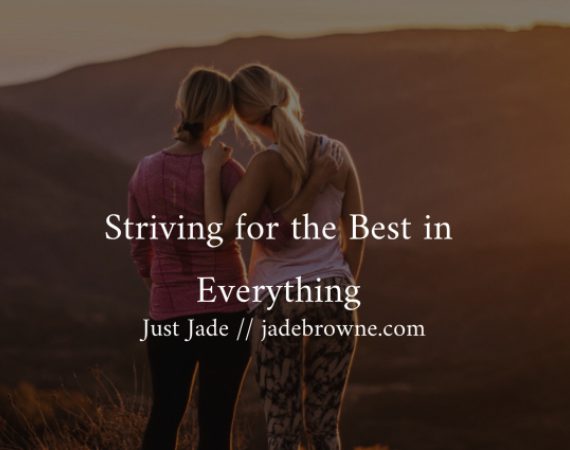 In life, there are many situations, scenarios, and hardships that will take a toll on one’s life. Whether it is a death in a family or even unforeseen circumstance of a job or a career change, situations such as these can produce negative actions and emotions. There are thousands of positive quotes, poems, books, and songs to use as an outlet during tough times. However, the first step towards striving for greatness is wanting and yearning to better oneself. It is essential to ignore the negativity in life and push through the rain.

Life is full of trials and tribulations. It is inevitable. For this reason, it is important to strive for the best in every area of one’s life. After rain, comes a rainbow and like this, a person will get through the trials.

During the time of the Greeks and Romans, “ancient athletes entered the stadium at Olympia” through a passageway similar to what today’s athletes would pass through at the start of a game or match (Reilly, 2014). Every day, people should strive to achieve their best as if it was their last. Like a marathon runner in the Olympics, the exhausted runner collapses from giving everything they have into the race by ignoring a cramp or ache and not letting it affect their overall performance. People should strive harder than an Olympian to be the best person they can be. Every morning, a person walks out from their own tunnel; a doorway.

There are people from every stage of the race watching. People can either let the negativity succumb and make them combust or, continue running their race to be the best.

Being the best is a competition. However, stereotypically, people have mistaken who the competition is with. While many try to compete with other people, the real opponent is oneself because no one can push harder. The comparison game does not profit an individual because of the unique gift and talents each person has. Striving for ‘perfection’ is a never-ending process. There are always additional levels and ways to push oneself. There could be a natural born leader within an individual but, without practicing this quality, they may not lead well or even know about it. If a person can recite the entire Russian alphabet, they should try to say it out of order and next, write it out. There is always an extra step that can be made to make a beginner more advanced.

Alongside this, there are also multiple ways of practicing and perfecting one’s craft through continuous practice. Like a hurdle jump in the Olympics, problems in a person’s life take preparation. An average person cannot decide to join the Olympics after watching one match. A musician, painter, writer, or even a teacher cannot expect to do well in their first practice. It takes large amounts of time and commitment to prepare for one event or moment. No matter the person’s background, age, race, or occupation, striving for a goal is a uniformed purpose. Such as in this example, a person cannot expect to be given large amounts of opportunities without facing trials. There are times to observe while there will be moments to shine and outrun everyone. These factors are building blocks to strengthen a person’s determination, desire to finish, and sense of focus to accomplish what their mind is set on.

This is a race for greatness.

1 thought on “Striving for the best in everything”