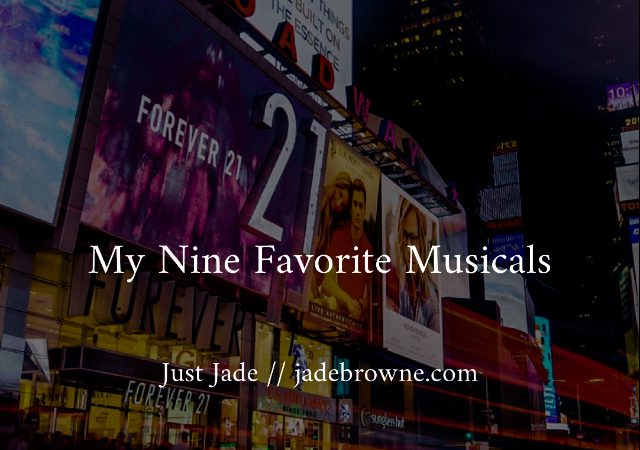 I love musicals! The singing, acting, and performance is a favorite of mine! If you’re wondering and searching for a good musical to watch, check out my list below!

I love the soundtrack from Wicked! I have the CD and the album on my phone. The comedy in the play itself is amazing as it shows the truth behind the story of the Wicked Witch of the West better known as Elphaba.

I love Julia Andrews in this musical. Again, I love the soundtrack so much that I enjoy replaying it over and over. An Austrian woman, Maria, studying to be a. Nun is sent to be a governess for a naval officer’s seven children.

“No one puts baby in the corner!” I love Dirty Dancing and the music included in the film. There’s emotion in the musical that makes you feel as if you’re in the movie. The acting is amazing and so is the storyline.

The 1989 version can be viewed here for free on YouTube. This is a twist on the classic Little Red Riding Hood tale. The two versions are very different and I suggest watching 1989 one first. I enjoyed both!

There is an older Hairspray but, I love the 2007 version starring Nikki Blonsky, Zac Efron, Amanda Bynes, John Travolta, and Brittany Snow! The film takes place in the ’60s in the midst of segregation.  For history buffs, the film takes place in the non-fiction time of the Civil Rights Act, the sexual revolution, and Fat Acceptance Movement. I love Tracy and the actors portraying the characters.

The first Sister Act sets the tone of what’s going on but, my favorite is the second movie. I love the songs and ensembles in the movie. Deloris Van Cartier was relocated in disguise as a nun after seeing her mobster beau commit a murder crime. Her upbringing and ways of upsetting the usual peaceful covenant. In the sequel, she is asked to teach a music class to troubled teens.

I saw Lion King while in New York and I absolutely loved it! Before seeing the Broadway play, I loved the Disney movie itself. The performance and costumes were spectacular! If you get a chance, I definitely recommend seeing the production.

“I got chills! They’re multiplying.” There’s nothing like Sandy and Danny to get you into the mood of dancing and singing. Their summer romance blossoms but, will their cliques allow it? The classic is everything! I prefer this to the live version. This is kind of like a retelling of Romeo and Juliet with a twist.

I saw this play at my local theatre! I loved it for the iconic song and the characters! Taken place in the 1920s during the time of silent films, the industry starts changing when sound pictures are introduced. Two popular silent movie stars, Don Lockwood and Lina Lamont, are brought to star in a musical for the first sound movie! The problem is, Lina Lamont is not a singer. So when a chorus girl is brought to dub Lina’s singing and speaking, what happens when enough is enough? This is a must-see!